The Day the Flowers Died 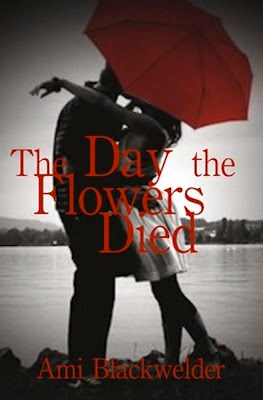 Sunday, February 14, 1932
Valentine’s Day was a big day for Eli.  He wanted to do something special for Rebecca and met her early Sunday morning to tell her she would have to let him blindfold her.  She did of course, and Eli guided her down the steps to his car and then drove her to an unknown location.  He walked with her over soft grass until pausing and sliding off the blindfold.  A wood picnic table under a large cascading tree sat next to a blue green lake.  Two lit candles sat in the middle of the worn wood table with two plates of delicacies.
Rebecca leapt into the air, eager to enjoy the Valentine meal with the man she loved.  Two long elegant glasses stood next to each plate, filled to the brim with white champagne.  Rebecca gleefully scuttled to the decorated table and smelled the plate of food as she sat.  She laid her Dresden Wire Mesh handbag on the chair beside her.  The soft painted pink petals and pale green leaves decorating the bag were a perfect complement to the nature encompassing them.  The late winter chills in the wind pervaded the park and tossed Rebecca’s long hair.
“This looks lovely.” She smiled subtly and Eli returned her gaze.
“A plate of your assorted favorite foods,” Eli pointed showing her each one. “Smoked duck, a pocket of caviar, baked carrots, and sautéed pears.” With each named food, Rebecca’s smile grew wider, realizing Eli knew her so well.  Rebecca savored the duck and then picked up a spoonful of carrots.  She nibbled a pinch of caviar and then sipped her white champagne.
“Did you cook all of this?”
“I spent all Friday night a slave in the kitchen.” Eli smirked.
“You told me you had to work late.”
“And I did,” he joked.  After the meal, Eli pulled up two paper bags and handed one to Rebecca.
“Another surprise?” Rebecca’s warm gaze fell over Eli’s face like shadows on the sidewalk.
“Open it,” he said and Rebecca didn’t resist.  She pulled out a pair of pink ice skates with matching laces. Holding the skates beside her foot, she danced on the grass in spins. “Looks like they will fit.” Eli stared at her.  “Thank you Eli. The color is beautiful.”
“We have a lovely frozen lake.” Eli grinned, “a picnic, and a wonderful day to ourselves. What more could two people want?” Eli persuaded. Rebecca’s loud guffaw was coupled by her tousled hair. Staring at her, she felt Eli wanting something.”
“What?”
“Please, try on the skates.” Eli encouraged.
“Now?”
“Just a moment. We can test them out on the ice near the shoreline. I will hold your hand.”
“But...”
“Don’t worry. I will hold you.” Eli winked.
“Alright.” After Rebecca pulled her two skates over her feet, they walked, hand in hand, with Eli doing most of the balancing, to the frozen lake.
Her honey-touched brown hair glistened under the late winter sun and the dew from the grass also hung in the sky on her nose. Eli brushed the loose strands off her cheeks and collar before lowering his lips to her supple neck. Her lake blue eyes radiated under the sky and Eli’s contrasting deep brown eyes sat like steady stones.
Holding her hand steady, Rebecca pushed off the shoreline onto the hard ice. The two separate bodies twined so close became like one, at least to a distant observer.
“Stay near the edge. We don’t want any accidents.” Eli stated.
“Are you sure this is safe?” Rebecca questioned with furrowing brows as she stared at her feet over the ice.
“I used to come here with Papa as a boy. The ice is hard. Just don’t leave my hands.”
“I won’t.” Rebecca giggled in a smile, thinking she would be a silly girl indeed if she broke hands with the one man holding her up securely.
“I love the weather this time of year,” Eli whispered and she could only smile, closing her eyes against the soft breeze. Rebecca pushed with Eli at her side and she almost slipped when she tried to turn around, but Eli caught her. Stumbling in his grip, he grinned and she gritted her teeth, but soon she stood and smiled.
Stepping off the ice and onto the grass, Eli pulled her up spun her into his arms, even the weight of skates could not keep him from her.  Carrying her to the picnic table, she sat to pull off her skates. Then, they lay on a quilt Eli straightened out over the grass near the picnic table. Letting the cool sky fall over them like a blanket, they rested in each other’s arms, their toes touching.
In this quiet moment, the only disturbance between them was of politics reminding them that the country and the world were changing.
“Do you really think Hindenburg won’t remain president for much longer?” Rebecca inquired.
“Elections are coming up.  Anything is possible.” Eli glanced away at the sun before returning his gaze.  “Hindenburg is the favorite, but he’s getting old and his mind is not what it used to be. If Hitler runs this year, who knows what will happen. He makes promises the people want to hear and, despite his party’s violence and radical ideas, the people want bread on their tables.” Eli kissed her lips.  “But we can hope.” The morning trickled into late afternoon and they headed back to their apartment building.

Monday morning, Eli read over briefs and statements that needed to be reviewed for court in the afternoon.  Aaron burst into the office with a newspaper swaying in his hands.
“Did you read the morning paper yet?” Aaron’s voice sounded frustrated and his movements agitated.  He sprawled the paper over the mahogany desk in front of Eli. “President Hindenburg reluctantly agrees to run again, announcing his candidacy for re-election.”
“That is a good thing.”
“I’m not finished.” Aaron ran his finger across the next line in the paper, “Hitler decided to oppose him and run for the presidency himself.” Eli sunk in his chair, remembering Rebecca’s words, “do you really think Hindenburg won’t be president much longer?” It wasn’t set and Hindenburg had a stronger following than Hitler, but it was one more step forward for the Nazi party.
“Why aren’t you in your office next door?” Eli asked.
“Not very busy for me these days.” Aaron’s lip curled.  “My colleagues, Cynthia and Robert from the party, have no trouble finding new clients.  I, on the other hand, am having a hard time holding on to my old ones.”
“Sorry,” Eli said in a soft voice, both of them knowing the reason wasn’t that he was a bad lawyer, but that he looked too Jewish.
Aaron ruffled his fingers through his dark curly hair.  “You’re lucky.  You get to work with your father.  He makes sure you acquire clients.”
“Even our business has lessened this year.  The Nazis are first-rate at spreading propaganda.” Eli glanced over the newspaper again, reading the quotes enclosed: “Freedom and Bread,” was printed underneath Hitler’s picture as his personal slogan to perpetuate his campaign.
“Freedom and bread! How memorable!” Aaron reacted in disgust.
“Hitler has a monster of a campaign and Hindenburg is essentially resting on his reputation as former president.”
“Hitler won’t win,” Robert said, squeezing through the opened crack in the door.  Aaron and Eli both jerked their heads up at him.  “He won’t have enough supporters and he knows it.  This is just a ploy to gain more Nazi sympathy and followers.” Robert closed the door behind him.
Aaron’s eyes sharpened in the corners, “And it’s working.  His influence has already reached into our law offices. What’s next, synagogues?”
“I don’t know,” Robert said with sincerity, “but he has another speech scheduled in Berlin today and there’s a Nazi rally downtown.”
Robert handed a Nazi pamphlet to Eli, who stood to take it.  “This was handed to me this morning on my way to work.” The pamphlet read: The Sensationalist Newspapers  Lie! Biased and racial slurs filled the pages, propitiating a Nazi world view.  Eli clutched it in his hands, then crumbled it, thudding heavily onto his seat.
The work day was long as all days were without Rebecca at his side, but this day was worse, because Eli could see the grip of the Nazi party tightening like a rope around the neck of the country he grew up in, of the country he once loved.  Eli walked to his old Audi and drove home for the day, seeing plastered over the city walls posters of Hitler and his Nazi campaign.
Some announced sixteen simultaneous mass meetings in Berlin on the problem of unemployment, 5,600,000 demand work, and some stated:
“Germans! Give your answer to the System! Elect Hitler!” Everyone knew that ‘system’ was a pejorative Nazi term for the Weimar Republic, who they blamed for the problems the country faced.
Other posters came more to the point of the problem, to the very core of Germany’s economic collapse, stating, “The Jews are our misfortune,” after the meeting by Julius Streicher, a leading Nazi who stood by the displayed words during his speech.  Posters plastered with Jewish and African derogatory comments became more frequent and more widely accepted.  Eli slid behind the wheel of his car, tugging on his pale grey tie with sparkle on its opposite side reminding him of Rebecca on New Year’s Eve.
He drove over the roads he grew up on as a child, the roads where he first rode his bicycle and fell to scrape a knee, where he walked to school  and had his first kiss. These roads where as much a part of him as they were anyone in Germany -Jew or German- and he wouldn’t let someone tell him he didn’t belong to them. When he parked his Audi and plodded to his apartment building, he grabbed his chest at pains burning inside, though no such physical sensation was there, before opening the front metallic door with its broken latch.