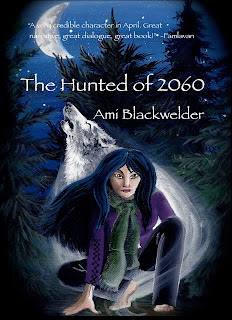 
Set in Alaska in 2060, when April enters her Sophomore year at University, she thought Robert might be the love of her life, but as she discovers, she is hiding something inside her, something the rest of the world believes to have died out.

She struggles with who she was and who she is becoming as she learns of a family she never knew existed and of enemies she will have to outrun, outfight or outwit to survive.


Review:
The fact that it was set in 2060 made even more interesting than it would have been if it were set in the present. From the very first chapter Blackwelder had my full attention. April had a lot going on in her life before she even went into the world of shifters. It was when she was introduced did she changed completely.
While I thought April's relationship with her boyfriend was interesting, her relationship with her pack was stronger. Even if she didn't want to admit it. While I admit I wanted her to end up with her pack instead, real love always stays together. Though April had a strong relationship with her pack I thought her relationship with her actual blood was interesting.
I loved how Blackwelder made up her shifters. With the different color skin, to the fact that they are always twins was definitely something I have never read about. Not only do you get to meet the ones in her pack but later on in the journey yo get to meet others. How they met, was very interesting to read.
While not only was the read great, but in the back there are avatars of what the characters are supposed to look like. I thought that was quit interesting, and it helped to look back upon just to imagine what the scene looked like. Ami Blackwelder wrote a book that was not only easy to read, but not too easy where you felt like you were reading a children's book. While sometimes I may say I would like to be whatever it is the book is talking about, not in this book but I mean it in the best way. Who would want to be hunted? Literally. Though it may have not ended exactly how I wanted it, but if it did the story may not have had an actual good ending.
The Hunted of 2060 was a very interesting read, and I will definitely look forward to more of her work.
Posted by Amy Blackwelder at 6:03 PM