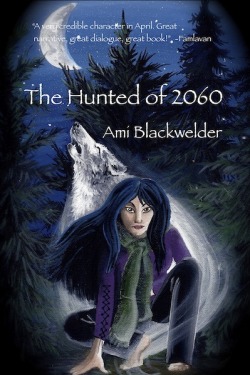 The Hunted of 2060 by Ami Blackwelder was a fantastic read!  Becoming a shape shifter is the easy part,  staying alive is what becomes the challenge.April knew there was something wrong as she wrenched in pain at random times throughout the day.  She knew she must be careful who she could trust and confide in as well.Her boyfriend Robert wanted to be there for her.  He continually put up with April avoiding him,  just wanting to become closer.When April meets the sister she never even knew she had,  she finds out she is hybrid,  part wolf and part human.  She must learn how to survive as she learns how to deal with the fact she is a shape shifter,  and that she is being hunted by the Rogue Malitia,  who wants to eradicate their kind.As they fight for their lives,  April is also fighting for love.  Her human part wants to be with Robert,  while her wolf part is drawn to another wolf named Arkin.  As these three struggle with love,  they must learn to survive each other as well as the Malitia.  Can they survive emotions and save their species before they become extinct?  Find out in The Hunted of 2060.Blackwelder did a fantastic job pulling the reader in from the first page.  With everything we know of all books in this genre,  she keeps a lot of originality to keep just the right twist on it.I give The Hunted of 2060 ****1/2 (4.5) Stars, BK Walker,  http://bkwalkerbooks.weebly.com
BK Walker -Author of Death Upon Me and Dares And DreamsBK Walker Books Services: Book Reviews and Book Featureshttp://bkwalkerbooks.weebly.comhttp://www.myspace.com/bkwalkerbooks http://www.twitter.com/bk36http://grou.ps/authorsnetworkinghttp://virtualbooktourcafe.weebly.comBlogs:http://bkwalkerbooksetc.blogspot.comhttp://immortylcafe.blogspot.comhttp://walkermuse.blogspot.com http://bk-walker.livejournal.com BK Walker on Blog Talk Radio:http://www.blogtalkradio.com/bkwalker Call in number - (718) 664-9341
Posted by Amy Blackwelder at 1:56 PM