Earth Angel and Boyfriend from Hell 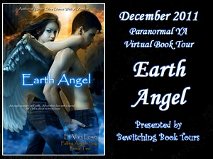 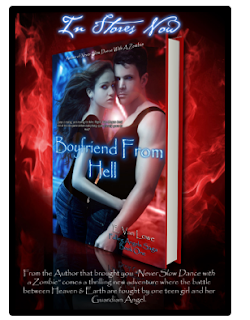 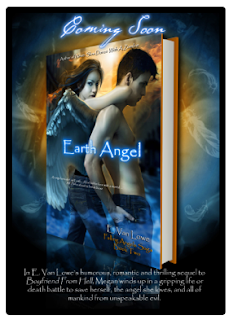 Boyfriend from Hell
By E Van Lowe
Genre: Paranormal YA
Book 1
Aww, Hell No!
Fifteen year-old Megan Barnett and her single mom, Suze, have a special relationship—they are friends, close friends, who do almost everything together.
“But come on, guys, she’s my mother… Can I really tell her that while we’re snuggled up on the sofa watching Spider Man Three, I’m secretly undressing James Franco with my eyes?  Of course not…”
The special bond takes a turn for the worse when Suze decides to start dating again.  She hasn’t had a man in her life since Megan’s father left ten years ago.
Enter two mysterious young men, Megan’s new classmate, sinfully attractive bad boy, Guy Matson, and the dangerously handsome art dealer, Armando.  Before long Megan and Suze both wind up in steamy relationships.  But neither of the handsome guys is quite what he seems.  In fact, one of them is Satan, with his sights set on a new bride.  Megan has precious little time to figure out how to stop him.  If she doesn’t, either Megan or Suze are quite literally going to HELL.
Boyfriend From Hell is the first book in the Falling Angels Saga from the author of the gruesomely hilarious, Never Slow Dance With A Zombie
www.whitewhiskerbooks.com
YouTube Trailer: http://youtu.be/39hI9rmwI5A 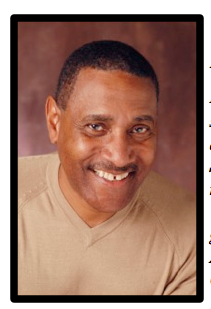 About The Author
E. Van Lowe is an author, television writer, screenwriter, Playwright and Producer who has written and produced such shows as The Cosby Show, Even Stevens, and Homeboys In Outer Space.  He has been nominated for both an Emmy and an Academy Award.  Van Lowe recently stepped into the young adult fiction genre with his comedic novel, Never Slow Dance With A Zombie.  It was a selection of the Scholastic Book Club, and a nominee for an ALA Award.  Boyfriend From Hell is Van Lowe’s second YA novel.
www.evanlowe.com
http://vanlowe.blogspot.com/
http://www.facebook.com/pages/E-Van-Lowe/152364748167154

REVIEW:
This series is AWESOME! I loved these books and highly recommend them to anyone looking for  a great paranormal or angel series!!!
Posted by Amy Blackwelder at 8:39 AM