She Speaks to Angels Cover Reveal and Tour Schedule

She Speaks to Angels is a new YA Paranormal Romance! Check out the tour schedule below... 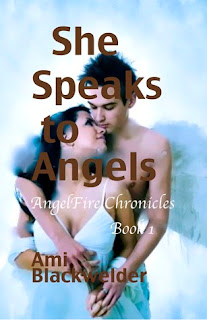 "I tried not to sound hysterical, but it’s not every day you find out the paranormal is hunting you."
What if everything you believed was a lie?


Seventeen year old Allison Maney attends Millennium High School in Manhattan. Nothing out of the ordinary, unless you consider the occasional suicides at the school. At least that is what everyone is told, what everyone believes. But Tommy Bachelor was a popular football player; why would he jump off the roof of the school?

When Dameon pays attention to Ali, she couldn't be more excited, because for the past three months he was all she could think about. But now that Dameon is finally pining for her affections, she is becoming more and more wrapped up in a clique of three who, as new transfers to the school, are proving to be trouble. But at least Dameon loves her, doesn't he?

Kian- a dangerous love interest she did not ask for.
Powers- belonging to an underworld she never knew existed.
A Clique- that could be friends or foes?


The underworld of angels and demons have one thing on their mind: Earth. Demons want to do what they want. Angels want to protect humans from these rogue angels, AKA: Demons For Allison Maney, everything is not exactly what it seems…


Caught between Dameon and Kian, the suicide and the clique of three, Ali won't know who to trust…or who to love.
Amazon * Barnes & Noble * Goodreads 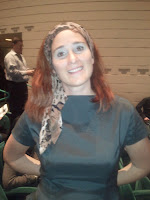 About the Author
Ami Blackwelder is a romance suspense writer in the paranormal, scifi and historical genres. Growing up in Florida, she graduated UCF and in 1997 received her BA in English and additional teaching credentials. Then she packed her bags and travelled overseas to teach in Thailand, Nepal, Tibet, China and Korea. Thailand is considered her second home now. She has always loved writing and wrote poems and short stores since childhood; however, her novels began when she was in Thailand.

Having won the Best Fiction Award from the University of Central Florida (Yes, The Blair Witch Project University), her short fiction From Joy We Come, Unto Joy We Return was published in the on campus literary magazine: Cypress Dome and remains to this day in University libraries around the USA. Later, she achieved the semi-finals in a Laurel Hemingway contest and published a few poems in the Thailand’s Expat magazine, and an article in the Thailand’s People newspaper. Additionally, she has published poetry in the Korea’s AIM magazine, the American Poetic Monthly magazine and Twisted Dreams Magazine.


Website * Facebook
Giveaway Time!
Ami is giving away an eBook copy of She Speaks to Angels and Bookmark to two (2) lucky winners! Enter in the Raffle below! Giveaway is US and International, Good Luck!