LOST -Chapter one, by Vivi Anna 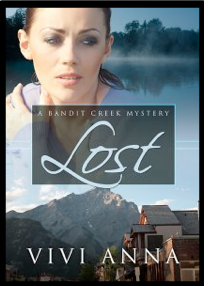 Kirsten Morgan can hear the dead. And now they are calling to her, to come home to Bandit Creek.

A girl has gone missing, and the law don’t have any leads. But the last thing Sheriff Samuel Morgan wants to see is his famous psychic daughter in his office telling him how to do his job. At odds for years, Kirsten doesn’t know how to talk to her father but she knows she has to push him to a place he doesn’t want to go. Because the dead are talking, and she has to answer, or lose her mind forever.

*This is a novella
Amazon
Lost (Mystery) – By Vivi Anna

Vivi Anna is a mult-published author with over thirteen books in print and ebook. She writes about kick-ass women and the men they kill for. To learn more, go to www.vivianna.net
Chapter One
The water rippled, sending whispers to her on its waves. She bent low toward the glistening liquid, listening, straining hard to hear the words the water wanted her to know. There was a truth there, she was certain of it.
On hands and knees, she settled her face just above the lake waters. Maybe if she submersed herself, her face at least, she could hear the whispers clearer. She had to know what the water was trying to tell her. Lives, she was certain, depended on it.
Slowly, she pushed her face into the water, her eyes open, alert, ready for anything. Because she knew there was something in the lake. There always had been.
She waited, her lungs bursting for air. The urge to open her mouth to take in oxygen ripped at her brain.
Finally, another set of ripples came from some movement in the water. As they undulated over her flesh, into her ears, she made out three words.
I.Am.Lost.
Kirsten Morgan jolted straight up from her sleep. Sweat shellacked her tank top to her back. It also dotted her forehead and upper lip. It was always that way after one of her dreams.
Sunlight streamed through the bedroom window. It was early yet. Too early on a normal day to be awake.
She swung her legs over her bed, and sat up, setting her head in her hands. The smell of copper still lingered in her nose. It wasn’t the scent of blood but something else.
Her head throbbed something fierce, as if something inside was getting ready to burst open. That probably wasn’t too far from the reality of her situation.
She rubbed her face with her hands, and held her head up, blinking to get her bearings. She’d drunk a lot of martinis last night. But she wasn’t normally one for hangovers. No, her unease and queasiness came from elsewhere.
Movement behind her on the bed made her flinch. She glanced over her shoulder to see Josh, her man for the month, rolling over to look at her. He traced a finger over her bare back.
“It’s barely six. Why are you up?”
“I got to go.”
She stood, punctuating her statement, and crossed the room to gather clothes from the dresser. Her clothes from the night before were strewn every which way. A morning chill raised the goose flesh on her arms and legs. She glanced down, realizing she was completely naked. She reached for the silk robe draped over her dressing chair and slid it on.
“Where are you going? I didn’t think you had an upcoming appearance. You said you were free for the next few days.”
“Yeah, well, that’s changed.”
Kirsten pulled open drawers and yanked out some underwear, T-shirts, jeans and various other garments. She tossed them onto the bed, then moved to her closet. She slid open the door and grabbed the suitcase buried in the corner. She put that on the bed as well.
Frowning, Josh sat up. “What’s the suitcase for?”
“I told you I had to go.”
“I thought you meant for the day. Not for a holiday.”
She unzipped the suitcase and piled her clothes inside. As well as shoes and boots, and a couple of jackets. “This is not a holiday.” She packed hurriedly, the urgency to leave making her jumpy.
“Jesus, Kirsten, what the hell is going on?”
“Look, Josh, you’re great and it’s been fun, but I’m leaving town for a while. Maybe we can hook up when I get back.”
“When will that be?”
She shrugged. “I don’t know. A week maybe. Two at the most.”
He grabbed her hands before she could shove more clothes into the bag. “Hold up. What the hell is going on? Did I do something wrong?”
“This isn’t about you, okay? I have to go somewhere. It’s important.”
He let her go and sat back. “Is it your work?”
Sighing, Kirsten nodded. “Yeah.” It was always her work that drove her from her bed, drove her from other people, from places that she’d temporarily called home. It was her work that sent her traveling around the world, involving herself in other people’s tragic lives.
Her head was still killing her and she rubbed at her right temple. If she was going to make it there in one piece, she’d need to take some painkillers before she got on a plane. The air pressure would be too much on an already pressurized brain.
“Where are you going? Can you tell me that much?”
She zipped up her suitcase, and set it on the floor. Sweat was trickling down her back. She wasn’t sure she was even ready to go. But, she knew without a doubt where the dream was telling her to go. She knew that water, she knew that coppery odor.
“Bandit Creek, Montana. I’m going home.”

Posted by Amy Blackwelder at 7:46 AM