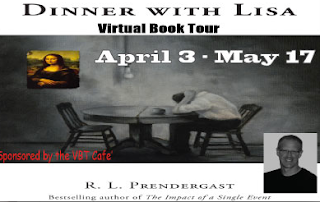 Rod L. Prendergast Media Kit
R. L. (Rod) Prendergast was the entrepreneurial kid you saw on your neighbourhood street selling lemonade on a hot summer's day. Recognizing young Rod's preoccupation with money, his mother bribed him to read with an offer of 25 cents per book—and instilled in him a lifelong love of reading. Although he continued down the path of industry—he started and sold his first business before completing his Bachelor of Commerce—he continued to read voraciously. After a number of years working in sales, marketing and management for several companies he spent a year's sabbatical surfing and reading in New Zealand and, free of business pressures, he began to write. Those first words became the backbone of The Impact of a Single Event—which was long listed for the Independent Publishers Book Award for literary fiction, and which became a national bestseller in Canada. Spurred on by the success of his first novel, he took another sabbatical and wrote Dinner with Lisa. He is currently working on his next book.
Genre – Historical Fiction
Format – Print & Ebook
Publisher – Dekko Publishing
Release Date – November 1, 2011
Website – www.rlprendergast.com
Email – rod@rlprendergast.com
Book Trailer - http://www.youtube.com/watch?feature=player_embedded&v=fttgZYChE74
Purchase Links:
For the print version:
B&N (U.S.)
http://www.barnesandnoble.com/w/dinner-with-lisa-r-l-prendergast/1106027863?ean=9780978454821&itm=1&usri=dinner%2bwith%2blisa
Amazon (U.S.)
http://www.amazon.com/Dinner-Lisa-R-L-Prendergast/dp/0978454820/ref=sr_1_2?ie=UTF8&qid=1320077626&sr=8-2
Chapters/Indigo (Canada)
http://www.chapters.indigo.ca/books/Dinner-with-Lisa-R-L-Prendergast/9780978454821-item.html?ikwid=dinner+with+lisa&ikwsec=Home&cookieCheck=1
Amazon (Canada)
http://www.amazon.ca/Dinner-Lisa-R-L-Prendergast/dp/0978454820/ref=sr_1_1?ie=UTF8&qid=1318282086&sr=8-1
W. H. Smith (U.K.)
http://www.whsmith.co.uk/CatalogAndSearch/ProductDetails.aspx?productID=9780978454821
For electronic version:
iTunes (U.S.)
http://itunes.apple.com/us/book/dinner-with-lisa/id490376394?mt=11
iTunes (Canada)
http://itunes.apple.com/ca/book/dinner-with-lisa/id490376394?mt=11
iTunes (U.K.)
http://itunes.apple.com/gb/book/dinner-with-lisa/id490376394?mt=11
For the Kindle:
http://www.amazon.com/Dinner-with-Lisa-ebook/dp/B005PQFX1K/ref=tmm_kin_title_0?ie=UTF8&m=AZC9TZ4UC9CFC&qid=1324054278&sr=8-2
For the Sony eReader:
http://ebookstore.sony.com/ebook/r-l-prendergast/dinner-with-lisa/_/R-400000000000000573146
For the Nook:
http://www.barnesandnoble.com/w/dinner-with-lisa-r-l-prendergast/1106027863?ean=2940032925668&itm=1&usri=dinner+with+lisa

DINNER WITH LISA
In the disastrous economic times of the 1930s, Joseph Gaston, a young widower with four children, arrives in the small town of Philibuster seeking security for his family. Instead, he faces barriers everywhere. He does his best despite great adversity, but the strain of feeding and protecting his family whittles away his strength. Finally, destitution forces him to consider giving up his children in order to save them. Enraged by his situation, he attempts one last desperate act—on the night he learns about the mysterious Lisa.

Heart wrenching, humorous and historically authentic, Dinner with Lisa incorporates the crucial issues of the depression: poverty, unemployment, drought and racism. In the midst of love and loyalty, trickery and despair, the ultimate message of the novel is one of hope and the courage to survive even the worst odds. 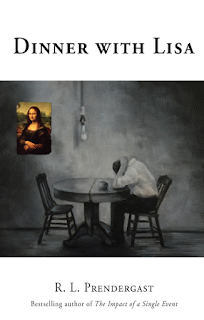 Excerpt # 1
He looked up when Nolan suddenly exclaimed, “Dad!”
“What?” Joseph felt drained as he pulled the overalls from the suitcase.
“The baby isn’t moving!” Nolan sounded alarmed.
Clare had been crying all day; for the first time she was silent. “She’s sleeping,” Joseph said, his attention still on Sarah.
Nolan’s brown eyes were wide with panic. “But, Dad, she’s not breathing!”
The words brought Joseph instantly back to his feet. Bending over the baby, he studied her closely. Nolan was right. Clare showed no sign of life. Quickly Joseph put his face to Clare’s nose and mouth, and waited—prayed—for her to exhale. Nothing. Were her lips blue or was he imagining it? He wasn’t sure. “Christ!” he muttered, as he grabbed the limp infant from Nolan’s arms and shook her gently.
“Did she swallow something?” he barked at his son, startling nearby passengers.
“No,” Nolan said tensely, as he watched his father part the baby’s lips and investigate her mouth with his fingers.
Joseph balled up Cole’s overalls and placed them under Clare’s shoulders, arching her head back and opening her windpipe. In an effort to force air into her lungs, he drew her arms up and over her head. When that didn’t work he flipped her onto her belly, turned her head to the side, placed her hands beneath her chin, and lifted her elbows to expand her lungs. All this took less than a minute.
Joseph had never been so frightened. He had done everything he’d been taught in the army, but Clare still didn’t respond. Oblivious to the silence in the car and the distress of those around him, he began to strike Clare’s back. Again and again he struck, each time a little harder. By now the baby’s small hands and feet were grey.
“Help! Someone please help!” he screamed, looking around pleadingly. “My baby’s not breathing!”
The other passengers were frozen with shock. No one moved.
Excerpt #2
Mrs. Hoogaboom was weighing the potatoes when the bell rang, the door flung open, and one of the fellows from the liar’s bench burst into the store.
“It’s coming!” he screamed.
In a flash, Beth and the men by the radio ran to the window and stared west down the street.
“Great Caesar’s Ghost!” Beth exclaimed.
Joining the nervous crowd at the window, Joseph wondered whether the day of reckoning had arrived. “What is it?” he asked urgently, as Beth and the men exchanged brief glances of surprise.
“A Black Blizzard,” Beth whispered in awe. “A bad one.”
The words struck a chord in Joseph: he had read about Black Blizzards. For thousands of years the natural grasses of the plains had kept the topsoil in place, even during times of drought. When settlers moved into the North American west and cleared the land to plant wheat, they had plowed the native grasses under. Years of intense plowing combined with an acute lack of rain or snow had robbed all the moisture from the soil. When the dry soil was hoisted aloft and blown by strong winds, immense dust storms—Black Blizzards—were the result.
Black Blizzard. Joseph heard that the dust from such a blizzard could cover the interior of a house even when all the doors and windows were tightly closed: the fine particles would leave streaks of dirt on floors, coat dishes in cupboards with light powder, and penetrate any food not sealed in Mason jars. He remembered other, more terrifying, details. Static electricity given off during a particularly bad Black Blizzard could be enough to light up a large city. Storms of sand and soil could create such high drifts that roads had to be closed, trains couldn’t pass and cattle strayed over fences. A person driving a vehicle had to turn off the ignition to keep the dust from smothering the engine. Most frightening of all, a person out in the open had to find immediate shelter, because dust pneumonia, caused when the dirt was inhaled, could permanently impair even the strong, and kill the young.
Until today, Joseph had taken descriptions of Black Blizzards to be exaggerated. Now, for the first time, he realized the terrible dangers of the dust storm. He could see it coming in from the west, a wall of black, thousands of feet high. To Joseph it looked as though a massive, unbroken wave was moving toward him.
Posted by Amy Blackwelder at 6:37 AM