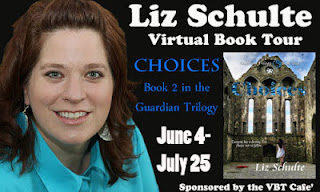 Liz Schulte:
Many authors claim to have known their calling from a young age. Liz Schulte, however, didn't always want to be an author. In fact, she had no clue. Liz wanted to be a veterinarian, then she wanted to be a lawyer, then she wanted to be a criminal profiler. In a valiant effort to keep from becoming Walter Mitty, Liz put pen to paper and began writing her first novel. It was at that moment she realized this is what she was meant to do. As a scribe she could be all of those things and so much more.
http://enteringbatcountry.blogspot.com/
https://www.facebook.com/liz.schulte
http://twitter.com/lizschulte
http://www.goodreads.com/author/show/4755336.Liz_Schulte
Link to Tour on Main Site -  http://www.virtualbooktourcafe.com/3/post/2012/03/choices-by-liz-schulte-guardian-trilogy-book-two.html
Hearts break. Loved ones are lost. Life keeps moving.

Olivia Martin’s afterlife was more dangerous and confusing than her life ever was. She thought she was ready to come back, to forget about Holden and to let go of the rage consuming her. Fulfilling her destiny as a guardian was all that mattered—the past could stay hidden in the crevices of her mind. However, when guardians are murdered and the evidence points towards jinn, she has to do something. To save anyone’s future, Olivia will have to confront the one person from her past she is terrified to see.

Holden waited for Olivia with the hope he would see her one more time. But when she didn’t return, he found salvation in darkness. The black and twisted road made it easier to forget what he lost than to live with the memory of what he had. An unexpected promotion shoves him into a world of intoxicating power and influence. Holden will have to choose between his new life and the woman he thought was gone forever.

From the ashes of Secrets, Choices are born that will change everything.


This book will be available for review at the end of March.

While Olivia Martin observed life through her camera, the abyss gazed back at her. She discovers mysterious men follow her around, people close to her are dying, and her dreams are no longer her own as she falls head over heels for a perfect stranger. A chance encounter leads to an obsession that could destroy everything she has ever known or loved. Olivia is about to find out there is a lot she doesn't know and sometimes what you don't know can kill you.
Excerpts From Choices :
#1
I don't know what I expected—certainly not the pain that tore through me when I opened my eyes. Feeling Holden immediately saturate my mind nearly shattered me and made me want to scream—or go back. I struggled and finally managed to shove him into a closet deep in my subconscious, where hopefully he’d stay until he disappeared forever—forgotten which was still better than he deserved.
Why did I agree to this?
Better yet, why didn't my heart understand what my brain so clearly explained? Holden didn't want us. He ... No, I wouldn’t let myself do that. I would not think about Holden. He was dead to me. It was the only way it could be, the only way I could do this.
Quintus was waiting for me, all dimples and kindness—the traitorous bastard. Where was he when I needed him? Why didn’t he save me? The accusations running through my mind fell aside, as I noticed how weird things were.
Everything looked different making me sad that my camera would never be able to capture what I now saw—not that I had a camera anymore. Lights and colors shimmered through the air and the trees, like I was inside a snow globe that someone was relentlessly shaking. How had I not seen all the things around me? It was incredible.
The more Quintus spoke, the more I realized I had a lot to learn and plenty to distract me from the person I wasn't thinking about. I was also not thinking about the fact that I’d been running around the forest stark naked giving Quintus quite a show until he made a crack about what we needed to do first.
I didn’t think it could get worse until Quintus made some god awful dress appear on me.
"So what now? Do we walk?" I squished my bare toes into the soft leaves beneath my feet. All I wanted was to not think about the past. The past was where he was and where I was angry at Quintus.  I could only look forward now, because hindsight offered no solace, no future.
"Do you know where we are?"
"I assumed you knew. I mean you came here. I just appeared." I frowned at him.
"I was sent the same as you."
"So we're lost? Great! What kind of operation is this?"
"Guardians are never lost." Quintus flashed me his ridiculously deep dimples, but I felt no appreciation for them. There was only one smile I wanted to see—
Needing to keep moving, I trudged through the woods in the direction I was facing. I heard Quintus walking behind me. How could he come to get me without a better plan than this? How did I get stuck with the person who’d abandoned me to a demon? My afterlife sucked.
#2
Philip Pemberton come on down, you’re the next contestant on Sorry I Destroyed Your Life.
Damn it all to hell, I felt bad for old Phil. He made his deal with the demon and was well on his way to avenging his family and becoming cursed to this cruel and Godforsaken existence. And because of yours truly. What did she ever see in me?
I walked away from the warehouse where I’d taken Phil to meet his destiny. All hope was gone for him now. I glanced at my watch, not even 11:00 pm—the night was just getting started. What else could I do this fine evening? Anything that could possibly squash this surge of humanity, I was up for trying.
It hit me like a tidal wave. One moment I was walking down the street, planning on having a little fun and the next moment I was nearly knocked over by a crushing light that washed over my mind and blinded me to anything in front of me. I staggered, fought to gain some sort of control, then I heard her voice. She said my name—I tried to reply, but she was gone as quickly as she came. It was like I’d been struck by lightning. Her voice rang in my ears.
I’d warred to forget the sound and timber of her voice. I’d battled to obliterate the memories of the smell of her skin and the taste of her lips. This one word from her and all that I tried to forget flooded back.
Could Olivia be alive? Was it a fluke, a coincidence? Did I finally reach her on the other side? Or had I lost all grip with reality? Instead of going out, I caught a cab home. I walked into my empty apartment and stripped the sheets from my bed before collapsing onto it. I searched my mind for any change, any clue that she was really there, and I wasn’t just losing my sanity.
Please don’t let this be a hallucination, I begged the universe.
Posted by Amy Blackwelder at 6:58 AM