ENJOY THE FOUR BOOK SAGA OF THE
ANGELFIRE CHRONICLES

Treat yourself to something delicious...

Unknown to the people of New York, there is an underworld of angels and demons combatting each other in the city. If a human sees one of these paranormal creatures, they loose Essence power and if enough see them, they will cease to exist.

Luckily, for the main paranormals only Ali Maney and a few others have knowledge of their existence. Not so lucky for Ali.

In a life or death pursuit, Ali must outwit the demon world in order to stay alive. Thank goodness she has a hot angel sworn to protect her at her side named KIAN.

But if we know Ali, and I think we do, she will find a way into trouble.

She Speaks to Angels released: Jan 2012

Ami Blackwelder is a Paranormal and SciFi author. Her stories range from Tween & YA to Adult. Growing up in Florida, she graduated UCF and in 1997 received her BA in English and additional teaching credentials. Then she packed her bags and travelled overseas to teach in Thailand, Nepal, Tibet, China and Korea. Thailand is considered her second home now. She has always loved writing and wrote poems and short stores since childhood; however, her novels began when she was in Thailand.

Having won the Best Fiction Award from the University of Central Florida (Yes, The Blair Witch Project University), her short fiction From Joy We Come, Unto Joy We Return was published in the on campus literary magazine: Cypress Dome and remains to this day in University libraries around the USA. Later, she achieved the semi-finals in a Laurel Hemingway contest and published a few poems in the Thailand’s Expat magazine, and an article in the Thailand’s People newspaper. Additionally, she has published poetry in the Korea’s AIM magazine, the American Poetic Monthly magazine and Twisted Dreams Magazine. 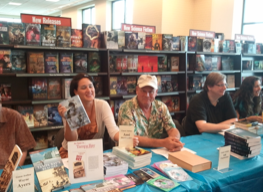 Posted by Amy Blackwelder at 12:11 PM