SIMULATION is now LIVE on AMAZON. Pre-Order the book below at the link. 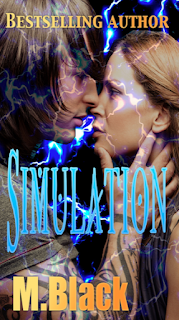 SIMULATION is a fictional novel and is the DEBUT release from Dystopian Thrillers author M. Black. A YA sci-fi dystopia, perhaps along the lines of City of Ember meets CW’s The 100. This story will capture your heart and still won’t let go even at the end. Written in part while listening to Outside by Ellie Goulding, this story contrasts technology to nature, rich to poor, privilege to hardship, and illusion to reality.  “No one is getting in but whom we allow, and no one is ever getting out.”Set in 2175 in Colorado, USA, where Citigogs are the new form of cities and citizens are kept under a careful population control, we meet Ilia the Princess of our main Citigog named Iliad, and Jez a Giver. As Ilia spends more time with Jez, she finds herself drawn to the Outside and ventures out of her Citigog only to learn that everything is not what it seems. Fans of the Divergent and Hunger Games series will revel in this story about a strong, but disillusioned heroine who must become brave as she uncovers the truth about her world.
Posted by Amy Blackwelder at 4:55 AM