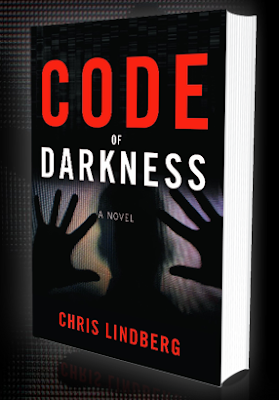 My Thoughts: I loved this book thus far. I really got into it and wanted to know what would happen! I love end-of-world dystopian, so it was right up my alley. I was only given the sample, so I can't tell you much other than I would recommend this novel to readers of dystopian, and end-of-world genre. His writing is fairy good with fun and realistic dialogue. The story is what drew me in the most.
http://www.codeofdarkness.com/
About Code of Darkness
When a routine bank robbery takes an unexpected turn, veteran Chicago police officer Larry Parker witnesses a heroic act by a mysterious intervener. But seconds later the Samaritan disappears, leaving Larry only with unanswered questions.
Suddenly, vigilante activity begins popping up all over the city – including several murders. Larry begins to gather the missing pieces of the puzzle, and finds evidence the Samaritan might be tied to them. When he learns the man’s identity – a loner known only by the name Rage – he prepares to move in for the arrest.
But there is much more to Rage than meets the eye: the case has also drawn the attention of a covert Black Ops division within the Pentagon. Their mission: find Rage, while keeping their operation out of the public eye. Seen as knowing too much, Larry suddenly finds himself in the crosshairs as well. After a deadly standoff, Rage is captured, forcing Larry to search for answers while on the run.
The deadly chase leads cross-country to a top-secret military facility in Virginia, where Rage and Larry uncover the greatest danger of all -- and only they can stop the unthinkable from happening.
Code of Darkness: This was one of the more fun reads for me! It reminded me a bit of The Burn with the dystopian hanging in the background. But I love dystopian, so no complaints!  I loved that it was cross-country. From America to England!  The first part, the prologue really drew me in and I was anticipating this great end-of-world novel. Unfortunately, I only had the sample to read and so I can't give a full review. But from what I read, I would be interested in more. so bring it on Chris!
About the Author
Chris Lindberg was born and raised outside Chicago, Illinois.  After graduating from Northern Illinois University in the mid-1990s, he headed out to the west coast for a couple of years, where he began writing as a casual pastime.
Some time after returning to Chicago he began attending writers workshops at StoryStudio Chicago, where he wrote two character studies, both of which have since been developed into key characters in Code of Darkness.
Chris now lives outside Chicago with his wife Jenny and their two children, Luke and Emma.  You might catch him working away on his second novel while commuting on his morning train into the city.
Chris Lindberg would like to offer an e-book for a giveaway.
Also, there will be a hosting incentive for the host with the most comments to win a $50 visa gift card. And a grand prize giveaway for a $50 visa gift card to the person that comments at every stop and follows the entire tour. This will be for at the end of his tour.
So, help me out followers and comment and I could win and you could win! 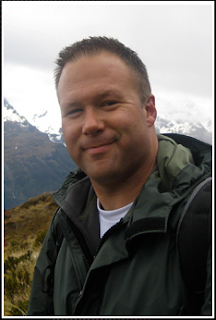 1) What inspires your writing, your muse?
Anything I find interesting, really.  Could be a conversation I hear, something I see.  Anything that sticks in my head and makes me say: "that could be an element in my story!"  What really helps is getting a chance to clear my mind: sometimes I'll go out for a run and just let all other thoughts & needs of the day melt away.  Once my mind is clear, I have my best creative moments.
2) If you couldn't write, what would you do?
That's a tough one because it's hard to imagine my life without writing.  I would want to do something involving the creative process, so maybe painting or drawing.
3) Who is your favorite author? Book?
My favorite author would have to be Cormac McCarthy.  I know that's a popular choice but he writes at such a different level, and I find that after reading one of his books, I push myself harder to improve my own writing.  As far as a book, hands down "To Kill a Mockingbird."  I'd have named my first-born Atticus if my wife had let me.
4) When did you know you wanted to be a writer?
Shortly after college.  I had a long commute to my job (and still do), and found myself having read about 10-12 books, when I decided it might be fun to try my hand at writing one myself.
5) Have you gone the traditional route? Indie route? or both?
I tried the traditional route but had little success landing an agent.  I think it's too hard these days, with the state of the publishing industry in flux.  Agents and editors just don't want to take a risk on someone new.  I decided I didn't want my book to die in a dark closet somewhere, never having been read by anyone, so I decided to take matters into my own hands, and go the indie route.
6) What advice can you give for writers out there looking to promote?
Use digital media: Facebook, Twitter, virtual tours, build a good website and promote yourself and your book.  Be shameless for awhile, just ask people for help.  I myself have a lot of trouble with that last part, but I'm getting better about it.
7) Name three places readers can find you?
You can find me by visiting www.codeofdarkness.com, and you can find the book on Amazon, BN.com, and the iTunes Bookstore by searching "code of darkness" ... you can also find me on Facebook by searching "code of darkness" ... I hope you'll visit!
8) Tea or coffee?
Tea, for sure.
9) Morning or night?
Both.  It's the middle of the day I have the most trouble with. :)
10) Cats or dogs?
Again, both.  I love all animals, we currently have a cat, but probably dogs if I had to choose.  A bit less attitude.

Posted by Amy Blackwelder at 6:03 AM