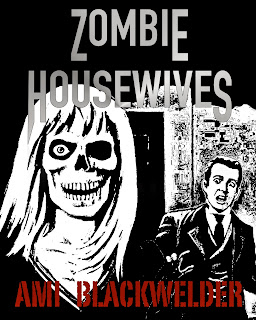 A dark comedy about housewives and zombies. The perfect read this holiday if you are a housewife or a zombie.

Zombie Housewives: It Started in the Kitchen

New Jersey, in the not so distant future...

Crystal and Alex
A silent scream erupted from somewhere deep inside Crystal. She could feel the anger building, like something inside of her broke. Slowly counting to 10, she gently placed the camera on the sofa and spun back around to glare at her husband Alex, her thin summer dress swirling around her. “Fine, I won’t pick up my camera again! I’ll spend all day in the kitchen.” Trapped, she felt so trapped, unconsciously her upper lip curled like an angry dog.
Her husband Alex threw his hands up before finishing his point, just like he always did, and then his hands landed on his suit’s slacks. “I didn’t mean it like that, Crystal. I just need you to be more focused on the housework. Dishes are piling up and the floors are dirty. I’m at work all day and then come home to this...this filth.” His carefully trimmed eyebrows sat at angles over his dark slanted eyes. He was tall and slender, one more thing this mother would blame on Crystal, somehow. Sometimes she imagined him floating out the window like a kite, his words dragging behind him like a tail.  It may not soften the stabbing complaints seeping from his mouth, but the image of him flying away made the words a little less painful. Wow, when did she start wishing she could blow him out of her life?

Meet the author, AKA: Bookaholic 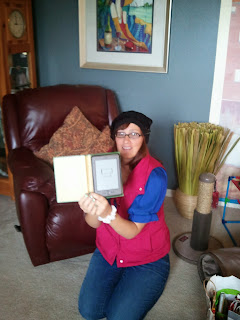 Posted by Amy Blackwelder at 11:17 AM