Nothing is fair in love and war and everything is corrupt in politics. Anyone who says Trump won fairly needs to wake up and as I like to say #GetAClue.
(Corruption is on BOTH SIDES) 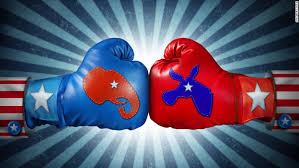 FACT: The DNC screwed the Democrats and unfairly brought Hilary in (with super delegates) instead of Bernie when Bernie won on the polls for beating Trump.

FACT: Since GERRYMANDERING in 2008 with the Republicans cheating for years and years, suppressing Democratic votes on the local level...(CURRENTLY REPUBLICANS hold 69 of the 99 CHAMBERS mostly because of this)...people feel disillusioned and that their vote doesn't count anyway, so what's the point.

(Blacks in particular have been suffering oppression from whites and rich folks for decades so this is nothing new to them and many understand this better than whites).

FACT: Since legislation brought on by the Republicans forcing voter restrictions, certain types of IDs as one of the those restrictions, (done deliberately to suppress Democratic voting, specifically black votes), again disenfranchising MANY democrats who are registered voters and legals who now CANNOT even vote legally. 30-40% of BLACK MEN in Florida have this problem.

FACT: Because the Clintons, under Bill, imprisoned many black men for petty drug offenses (as a way to appease drug control), many are pissed because this makes them  not allowed to vote--EVER!

FACT: Many people didn't vote because of the "Rigged system." I know many who swear they will not vote until robots handle elections, because people can't be trusted.
Posted by Amy Blackwelder at 5:37 AM