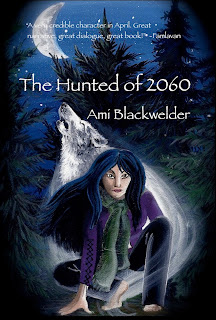 08/18/2010 by marcjohnsonbooks
Perhaps an allegory for the “monster inside all of us” is something that should be embraced rather than feared. Indeed the “monster” manifests itself in many ways in Hunted 2060, in the main character April’s ability to change into a beast, and the militia’s actions in seeking out and exterminating the Shapeshifters. Initially something that is feared, the beast soon is shown to be something of beauty and grace. In April’s eyes, the beast that she can become is an avenue of acceptance that she seems unable to find in any conventional ways.
Initially, I thought that the futuristic technological horizon of Hunted 2060 was a means of showing a yearning to return to simpler times. This seems to be accentuated by the April’s interest in Old English Stories.  Sometimes, though, the involvement of the technology was distracting and slightly confusing. Indeed, it sometimes felt out of place when the characters used their hologram watches or any of their other advanced tools.
This is really a minor issue in the context of the whole work. Hunted 2060 explores the complexity of a young woman trying to find some kind of acceptance. Rather, it points to the need in all of us to do the same. Even though this subject could be heavy, Ami Rebecca Blackwelder handles it gracefully and with more than just a little lightheartedness.
The action in Hunted begins almost immediately and doesn’t let up until the last few pages of the work where we find an interesting story of redemption for one character and the anticipation for a new beginning for others. Ranging in themes from familial betrayal to the needs to belong, the relationships in Hunted feel natural and even familiar. Even the stress relationship between April, her sister, and her mother – and believe me, it’s stressed – doesn’t feel forced. Overall, Hunted 2060 is a good read for anyone who is looking for a recreational read that actually has some depth to it, but doesn’t feel too heavy handed.
Posted by Amy Blackwelder at 5:53 AM