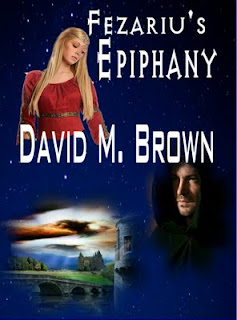 The White Oak, Clarendon's oldest brothel, lured and destroyed men by the thousands. Fezariu was different. He had never been drawn by the White Oak's vices but the brothel had still ruined him when he was just a boy. Salvation came in the form of the Merelax Mercenaries - Elenchera's most prestigious hired hands. They gave Fezariu the chance to escape from his past. Immersed in the world of dangerous assignments in the colonies Fezariu longed to forget everything about his childhood but only in facing the past would he ever be free of it.

I was born in 1982 in Barnsley, South Yorkshire. My passion for history began at primary school but it wasn’t until studying at college that I began writing fiction. In 1998 I discovered the Final Fantasy series and Norse mythology, both of which heavily influenced the birth of my writing. I first conceived the idea of the Elencheran Chronicles in 1999 and in the last decade have written five novels, several short stories and continue to work on an in-depth history of Elenchera that begins with the creation of the world and currently covers more than 47,000 years.

When not working on Elenchera, I enjoy reading (fiction and non-fiction), films (particularly World Cinema), music (mostly artists who are not in the higher echelons of the charts), computer games (mostly RPGs, of course!) and continue my long-suffering support of Barnsley FC whose perennial relegation battles have inspired many a dark tale in the world of Elenchera. Aside from a long-term ambition to be a full-time writer, I hope to one day have an isolated house in the countryside, surrounded by ample land and woodland for my six cats to roam free and to walk dogs daily in pursuit of regular fitness and inspiration.
I live in Huddersfield with my beautiful wife, Donna, our six cats – Kain, Razz, Buggles, Bilbo, Frodo and Charlie – and the fates of millions of lives resting on my shoulders – albeit imaginary ones, but it’s still nice to be omniscient and omnipotent in one world.
Posted by Amy Blackwelder at 5:21 PM