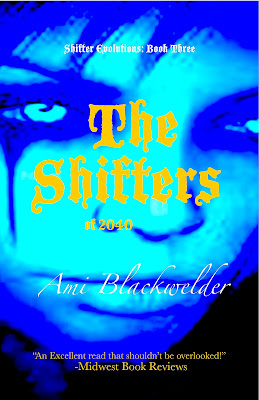 A Review of shifters of 2040 from NakedSnakePress
http://nakedsnakepress.net/?p=37
In 2020, the earth is invaded by an alien species that had the ability to briefly morph into animals or humans. However, as time passed, these “shifters” have hybridized. Now part shifter and part human, these hybrids can pass for humans longer and without notice, therefore infiltrating the population.
Jump ahead two decades and enter Melissa Marn and Bruce Wilder, a couple of scientists in charge of a DNA investigation of these “shifters.” Melissa and Bruce work tirelessly for the SCM, or Shifter-Contingency Military, an organization that aims to rid the planet of the shifters.
After a difficult day at the lab, Melissa heads off to a bar and ends up spending one torrid night with a sexy stranger who turns out to be the one thing she has worked to purge the world of—a shifter.
Problems arise when Melissa finds that she is pregnant, despite the fact she had previously undergone a procedure to keep her from ever conceiving a child, at the urging of her controlling father (Melissa’s mother died in childbirth and he does not want Melissa to suffer the same fate).
The real conflict of the novel centers on Melissa’s alliance to the SCM and to unborn alien-child. She must try to figure out a way to protect her child, while also protecting herself.
My little summary does not do this wonderfully constructed plot justice. Set in the frigid beauty of Alaska, Ami does an awesome job of creating a believable futuristic, fantasy world where, just like the world in which we live, is awash in prejudice and too much governmental power.
Ami brings a lot of life to her heroine, Melissa. Her inner turmoil is evident, but not overdone. Her personality is multi-dimensional and there were a few times when I thought she was a little annoying—I kept asking “why doesn’t this girl stand up against these assholes?” Overall, it works well, as I don’t enjoy over-the-top protagonists, anyway. They just aren’t as believable and interesting.
The complex characters are among the strongest points of the book–from the villain, Colonel Raul, a sadistic piece of work who gets off on tormenting shifters during experimentation, to Bruce Wilder, Melissa’s co-worker and (not so) secret admirer.
There are also interesting subplots, especially the one following hybrid-shifter, Diamond and her love for Keenan, a soldier who has been trained to kill shifters.
This book is action-packed and Ami’s talent for vivid description and strong, flowing prose is showcased throughout. Highly recommended for fans of science fiction of even paranormal young adult.
This is the first book of the Shifters Series. Grab a copy for your Kindle for only $.99.
Check out Ami Blackwelder on the Web.
Posted by Amy Blackwelder at 12:12 PM