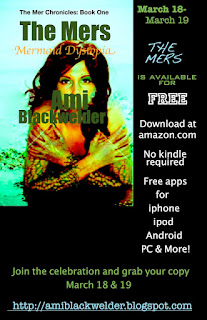 Sometimes I’m asked what mermaids and dystopia have in common and some readers picked up their copy of THE MERS just to find out. Could the author pull it off? Combining these two seemingly different genres? Decide for yourself.
Why did I write THE MERS?
Because I was inspired by the idea of a future world covered in water. With global warming issues, I think this world is one possible way our Earth could turn out. Floods and ice caps melting make this seem even more real.
But what would this world be like? Would humans resort back to their Neanderthal days? Resort back to the way life was in Old England before the age of Enlightenment. Without books and modern technology, much of our knowledge that we take for granted now-a-days would be gone.
How would humans survive?
This is how Remnantville was born. A land on the border of NJ, on the border of where THE MERS reside. Forbidden to Mers Remnantville consists of Aristos, Magi, Pirates, and Commoners.
Humans fall back on their ingrained sense of superiority. The Killing Fields, the Tibetan massacres, the Holocaust, Rwanda, South Africa. Humans have always drawn lines between groups of people. Prejudice and oppression is something deep with the fabric of humanity. I doubt humans will ver overcome this engrained fabric of ourselves, but my stories like to shed light on the consequences of such behavior and attitudes.
From The Day the Flowers Died, to Shifters, to Mers...my writing has one universal theme as an ongoing undercurrent.
The Aristo make up a people who revert to human behavior in the time of kings and queens of Old England.
Pirates are the rebellious humans who break the Aristo rules and Mer rules, killing Mers for money.
Magi show us a part of ourselves we don’t want to confront, the superstitious part that puts vanity before humanity.
Commoners are the common people who simply suffer under the hands of those above.
While many of the themes are deep, the story is light hearted and written such that even someone in elementary school can enjoy the story. A refreshing and heart-felt innocent romance, along with adventure and lots of laughs makes this story come alive in the bonds of a mystery unfolding...a mystery that reveals who Mira is by the end of the tale.
I hope this answers some of the questions about why I wrote this story and I hope you pick up your free copy 3/18-3/19 on kindle exclusively!! The novel is DRM free so you may convert the kindle mobi into epub or pdf for your convenience to read on any ereader or computer.
Posted by Amy Blackwelder at 7:37 AM