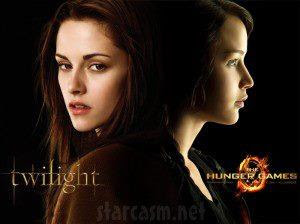 I will write up my review of each movie after I’ve seen it.
This first part is on the movie Hunger Games. I just got back from watching it and am still on my high. Almost as good as a buzz.
Who didn’t absolutely love Rue! OMG, she was so cute and I cried when she died. I especially loved that clever girl we never got to really know, but who kept showing up stealing bags or dodging people. LOL. Great.
The film mastered the boundary of pushing the limits to the edge, but careful not to cross it. It could have been gruesome, with kids fighting to the death. But instead of a blood bath, we got substance.
Special effects aside which were some of the coolest ever from  the wolf-dog, to the fire storms, to the ship, and even the city itself, the movie/story was laced with deeper themes and characters that made a story that easily could have been fast-food, into something more.
I appreciated the contrast between the poor and the aristocratic government. The government came across as very cartoonish, something surreal. But their cruelty ever so real.
Yet, the poor were very earthy, natural like, something we could relate to. It was a very interesting contrast.  The power struggle between the two sides was evident when Katniss broke all the rules saving Peeta.
I could appreciate this film mostly though for its originality and for its almost “Great Expectations” tone.  The governmental characters remind me a bit of Charles Dickens’ characters. Something not quite real on surface, but underneath the colorful skin, very real on hurtful human levels.
If this wasn’t a best seller, I doubt Hollywood would have filmed this, given that Hollywood seems to be a coward now-a-days and won’t film anything unless it is a remake with some fan base or a best seller. Seriously, look at all the films we have today.
G.I. Joe, Transformers, And yet another Spiderman, The Avengers. Every other film is based from a comic book, the 80’s or 90’s.
But I digress...
Conclusion, Hunger Games is great and while you won’t see me supporting films that are yet-another-knock-off from the past (since there are so many original scripts out there which should be given a shot), you will find me for the Hunger Games sequel, if they ever make it!
Recommended!
If you are looking for something to read before or after Hunger Games...check out my FREE book, SHE SPEAKS TO ANGELS! FREE from 4/7-4/9
http://www.amazon.com/She-Speaks-Angels-Chronicles-ebook/dp/B007PSPT5Q/ref=sr_1_1?ie=UTF8&qid=1333846921&sr=8-1
Posted by Amy Blackwelder at 4:53 AM

Labels: best sellers of kindle, free book, hunger games, she speaks to angels, ya angels, ya romance, ya thriller