Midnight: Century of the Vampires 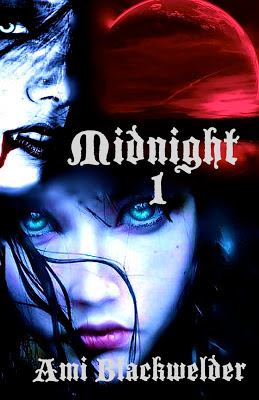 Century Vampires have only one rule:
There are no rules.
episode 1
By 2125 the world had been overthrown by monsters dubbed Century Vampires. Some kind of mutation in the human genome gave rise to the first ones, or so the scientists suspected. Vamps spent the first one-hundred years of their existence growing in number –some born, some turned –all deadly. They wreaked havoc for the past eighty-three years.
Vampires ruled the Earth now…
“Move your ass Mark!” Aura shouted from the mouth of the cave, where the rocks ended and the forest began –well, what was left of the forest after the constant brushfires of a world gone awry.
“Just one more bomb. Those bastards are going to have a real awakening.” Mark slammed his last homemade explosive against the cave wall. Searching the walls with his vigilant eyes one last time, he took note of the wrinkled skin hanging from the ceiling.
Like bats, the human vampires hung with feet clinging to the crevices. Their decrepit arms criss-crossed their chests. Rejuvenating themselves –well, that was what the humans called it. But how did they stick to the cave ceilings? Some humans speculated that vampire blood secreted some kind of sap through the pores of their skin. Others figured it was just pure evil that held them there.
“Let’s go!” Aura shouted. Mark had a way of pushing himself to the edge. Aura wanted to make sure he didn’t fall over it.
“One minute!” Mark yelled, staring at the cave walls. Aura watched his dark copper-brown wavy hair move like the tide over his face as he just stood there.
Standing on the border between the outside world and the dark cavern, Mark wanted nothing more than to watch those blood-thirsty monsters burst all over the damp walls. Here inside this cave before midnight they looked like the monsters they were, the creatures that sucked the life from his sister Laura, the vamps that decapitated his parents. Vampires didn’t appear beautiful until they turned and grew fangs at midnight. Then the deathly hollow their human bodies had become grew into something almost celestial and hypnotic-like, with unparalleled strength surging through their veins.
“We are running out of time! The vamps will be hunting soon!” Aura urged.
But Mark stood frozen, green eyes fixed on the blood-suckers, memory spinning. Aura dug her fingers and nails into his shoulders and spun him around to face her. “We’re going now!” Aura’s face filled with hot red color, and after she shook him once and he returned to her.
“I’m here, I’m going.” He lunged away from the cave and grabbed Aura’s palm in his. Racing across the fire beaten terrain, they had never moved faster. Wind hit their faces in a rush and their feet sunk into the soggy mud with each step forward.
Pop, Pop, Pop… Within seconds the cave imploded and went ablaze.
Bits of vamp flesh burned as it spattered across the barren forest. An arm limb nearly hit Mark in the head. The entire mission took nearly an hour to complete, the explosion just under a minute. The cave became rubble and debris shot everywhere.
“Won’t be seeing those blood suckers again.” Mark sounded proud, beads of sweat dripping down his cheeks.
“We still have to make it back to O-Tech-1.” Code name for the basement of the abandoned church in Manhattan.
Aura tightened her grip on Mark’s hand. “And you know a few of those mature vamps will be out hunting. Six to midnight is still not safe.” Aura emphasized that point often. Mark may not mind missions from dusk to dark. Most vamps still needed rejuvenation then, but Aura didn’t trust the dark. Vamp or no, the dark could be dangerous.
Besides she smelled the scent of something…someone following them for miles now. Someone familiar.

Posted by Amy Blackwelder at 8:26 AM