Meet April of The Hunted of 2060- She is dark, original, confused and desperate to discover who she is. Struggling with the urban life of the city and University and the instincts within her, she finds herself with a family she never knew existed, a species believed to have died out two decades earlier, from Rogue Militia eradication...and now she is one of the Hunted and must learn how to survive.

Meet Arken, the young 'heartthrob' of her species clan, determined to take April under his arms. But with a human, Robert, close to April's side and in her heart, it will be a triangle of emotions exploding...until one, human or alien, emerges victorious.
Take a journey of forbidden passions, dangerous struggles of the body and mind, and action!
http://amiblackwelder.com
The Hunted of 2060 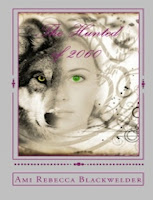