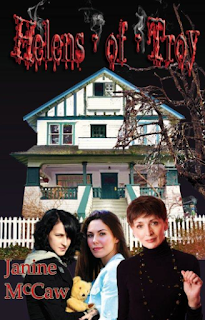 Janine McCaw Media Kit
HELENS-OF-TROY is the second novel completed by Janine McCaw.  For the Vancouver-based novelist it is the continuation of a dream, and the fruit of years of working in a different creative realm.
McCaw’s deep understanding of compelling plots, widely appealing characters, natural dialogue and strong story arcs comes directly out of her early career in the film and television industry. McCaw’s skills as an observer started early when her family uprooted from the City to small town Ontario – and she became the classic fish out of water.  Writing down her thoughts became an outlet as she scribbled her way through childhood, while she also developed her observational skills and visual eye with photography.  A die-hard hockey fan, McCaw studied Cinematography at Humber College, and was headed for a career as a cameraperson covering professional sports when she landed an internship in a broadcasting services company.
McCaw excelled in the television distribution arena.  She joined Thomas Howe & Associates and moved with that company to Vancouver, where she distinguished herself with her talent for identifying the right product for the right market, and her people-skills in negotiating contracts. After furthering her professional development with several high-profile Canadian entertainment companies, she parlayed her reputation as a leading Cable Programming specialist into her own boutique firm.  Formed with a partner, Dark Horse Ent. specialized in finding, and selling, niche Canadian television series - entertainment, information and variety - around the Globe.  McCaw also acted as an independent executive producer on award-winning television Classic Car series,  CHROME DREAMS, and as a distributor for series including ENTRÉE TO ASIA, and AT HOME WITH HERBS.
In high demand as an insightful, humorous and engaging guest speaker, juror and analyst for festivals and trade forums around the country, McCaw also spent large amounts of time traveling abroad to television markets.  Writing relieved the stress of constantly being on the road.  Increasingly, she turned her main hobby into outlines for novels, and finished fleshing out the characters, plot and dialogue for OLIVIA’S MINE, a fictional account of a young bride’s struggle to make a life for herself against the backdrop of the disasters that hit Britannia Beach, British Columbia in the early 1900s.  The book was released in 2006 and continues to be sold at the British Columbia Museum of Mining.
HELENS-OF-TROY was released early in 2012.  McCaw is also currently developing eight other stories for novel form.  All set on the Pacific North West and in Canada’s North, they include the murder mystery A LITTLE FIRST DEGREE,  a feel-good trilogy THE INN AT HAZY WATERS (Northern Exposure meets Fantasy Island), and PUMPER an action romance that has already garnered interest as the basis for a feature film.
Format-E-book

Fifteen year old Goth-chic Ellie has a lot of explaining to do. She’s just moved to the small town of Troy, fought with her uptight mother Helen, met the boy of her dreams and found a dead body on her sexy “new-age” grandmother Helena’s porch. All on the first night!

But Ellie’s not alone. Helen is hiding something. Helen knows all about the kind of eerie dreams her daughter is having — the dreams that show the whereabouts of the missing children of Troy — because she’s had them herself. But she’ll never admit it. Not while Ellie’s sex-crazed friend Ryan is safely behind bars for the murders. Helen knows what it’s like to be attracted to dangerous men.

Then there’s the little matter between Helena and Gaspar Bonvillaine, the teenaged vampire who is learning to feed on young prey. Now that he’s caught Ellie, he doesn’t know whether he wants to kill her or turn her to the dark side and keep her forever. Helena should have finished him off when she had the chance.

To survive the vampire feeding frenzy surrounding them, mom Helen needs to come to terms with her own insecurities and deal with the gifts she has. Helena must learn to ground herself for the good of mankind and more importantly her own family. And Ellie has the toughest choice of all. Ellie must decide whether its time to let her own childhood go and become the woman she is destined to be, one of the ageless and timeless “Helens of Troy”.
Excerpts:
“I don’t envy him,” Helen said to Helena as she tightened a fuchsia-hued scarf around her neck. It clashed with her coat, but it was the only one she could find while scrounging through Helena’s hall closet. “Having to tell a parent you can’t find their child,” she continued, “that would be a horrible thing to have to do.” She thought about all the times Ellie had threatened to run away when she was younger.
“It makes finding the odd body on a porch swing seem like a walk in the park, doesn’t it?” Helena said sarcastically. “I’m sure our bad days don’t even compare to theirs. I have to clean up snot all the time when I’m teaching someone how to use a neti pot. They scrape brains off of windshields after a head on collision. Neither are pleasant, but really…”
“Okay. Don’t get so defensive. Or descriptive. I take back what I said about the police and the cereal box,” Helen said. “Neti pot?”
“Think nose bidet. And thank you. But it doesn’t get you off the hook. You still need to tell Ellie about Willie.”
“Who’s that plump, curly-haired woman who’s glaring at us?” Helen asked, in an attempt to distract her mother. “I’m not getting a love vibe from her.”
“You mean the one dressed in the neon pink tracksuit?”
“Yes. She’s got to be cold in that outfit. Not to mention embarrassed. Never wear neon after Labor Day. Or ever, really.”
“That’s Betty Lachey, Ryan and Stan’s mom and our illustrious neighbor. With any luck she’ll be hibernating soon and we won’t see her until spring.”
“That’s not very nice.”
“Nor is she,” Helena laughed. “She hates us.”
“Us? How can she hate me? She doesn’t even know me.”
“Hate by association,” Helena said, forcing a smile and giving her neighbor a wave. “There’s a small town attitude in Troy, I’m afraid. You’ll get used to it. I did.”
“Is there a Mr. Lachey?” Helen asked, nodding politely to the woman.
“That subject is strictly verboten if you happen to want to keep the peace. Betty got sick of him constantly hanging around the house and told him to get a hobby. Well he did. A five-foot-six Texan named Traci. She was a brassy woman with guns from the double D ranch, if you get my drift. He ran off with her two summers ago.”
“Well, that explains why she hates you.”
Helena looked at her daughter. “For the record, I never even looked at her husband.”
“Hate by association,” Helen answered.


PARANORMAL WRITING: KEEPING IT REAL
One of the challenges I found when writing Helens-of-Troy was how to keep my supernatural characters acting semi-normal in a mortal world.
My first novel, Olivia's Mine, was historical fiction based on fact, so there wasn't a whole lot of room to play around. Perhaps that's why I personally found the paranormal genre a lot more fun.
While the paranormal genre is a godsend for writers who don't like boundaries, I think there are some invisible ones. Since my characters live on earth, I have decided that they need to fight their demons with items found on earth, i.e. there will be no battleships appearing from the sky with a battalion of ghost hunters to help them. But that's just me.
I think one of the reasons the television series "Supernatural" has maintained a huge fan base for several seasons, is the relationship between the brothers.  They may lie, cheat and steal, but the bond they have between them bonds the viewer to them as well.  This is the relationship I try to achieve with my women in Helens-of-Troy.
I think that the paranormal fan secretly wishes that the heroics of the characters in any book could be done by themselves if they only had a little more power. Not "rule the world" power, but enough fortified energy to see if the irritating neighbour next door really was a demon in disguise. He's hiding something behind those windows he won't wash, and damn it, I'm ready for whatever it is. I just wish I had a heavy shovel and maybe a sidekick to help me.
How do you kill your demons?
Posted by Amy Blackwelder at 7:28 AM