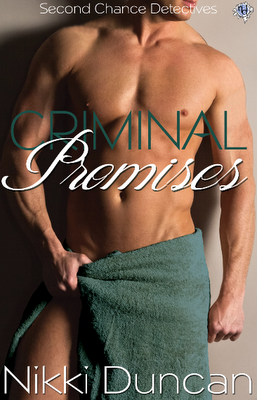 She's been targeted for murder. Is she the one in need of rescuing?

Seasoned, act-first-ask-questions-later Detective BD Harte is assigned to protect Maggie Sullivan when she’s targeted by an escaped serial killer he’d put away a year earlier. Getting up close and personal with the sensuous widow he felt an inappropriate temptation for threatens BD’s emotional distance. Attraction quickly flares into an irresistible passion, forcing him to wage a battle of self-control, while memories rip open an old wound, awakening his longing for the life he almost had…and still covets.


After one too many violent taunts shatter her sense of security, single mother Maggie Sullivan invites Detective Harte to conduct his all-night stakeouts from inside her home. When her home is again broken into and she discovers Harte’s been investigating her late husband, she struggles with her attraction to him. But the comfort she finds in his arms, his understanding and tenderness, and the passion he awakens triggers yearnings she’d long ago given up on…and still desires.

Can two wounded hearts come together as one in time… Or will the killer seeking a powerful key to nuclear weaponry ensure they never have the chance?

“You rotten shit. Get out…” Maggie Sullivan grunted as she swung the broom, chasing an irritated raccoon through the kitchen.

Not that she expected it to listen, but the destruction the overgrown rodent or mammal or whatever it was had caused in the few hours she’d been gone had her cringing. She would get her sister back for taking the kids and leaving. Even if Grace hadn’t know about the hidden cretin.

The raccoon jumped on the couch and scattered cushions before jumping to the coffee table and back to the floor in a flurry of magazines. “Arrrggh.”

Maggie thought of herself as a calm woman, but she teetered on violence. She’d spent the morning in her office—was nowhere near finished with the website she’d been contracted for—and had several more hours of work still to do. Now was not the time for Jared to resume his childish pranks.

She closed in on the raccoon and lifted the broom to swat at it. I feel like a rodeo clown chasing a bull out of the arena. At least they don’t have to clean a mess afterward.

The raccoon spun around and ran under a corner table, knocking her favorite decorative bowl to the carpeted floor with a muffled thud and headed to the bedrooms. At least the bedroom and office doors were closed. If Jared thought a raccoon made a good pet… He had another think coming.

Maggie hustled down the hall, shooing her furry nemesis. She just had to herd it to the door where hopefully its survival instinct would have it running outside. Then she would worry about setting things back in order.

Had she honestly been thinking she missed Jared’s stunts? The kid watched too many Crocodile Hunter reruns.

Head down, Maggie followed the beast around the corner into the entryway. “About time you get there.”

“It’s a nice neighborhood,” a deep-timbered masculine voice said from the doorway. “But leaving your door open isn’t smart.”

Maggie screamed. Her heart slammed into her ribs. She swung the broom up like a golf club to fend off the intruder, smacked the raccoon in the rear. It squealed and slammed into denim-clad legs.

A giant man crashed to the porch. The raccoon skittered across the man and scurried to freedom. Maggie barely managed to stop herself from spinning in a circle as her makeshift weapon flew through the air, missing her target.

With the man already down, she raised the broom again, ready to pop him. She’d slam the door and lock it, but his tree-trunk legs lay across the threshold. Still, if he made a wrong move…

She wouldn’t miss again. No one would threaten her or her kids. Not if he wanted to keep walking.

“What is wrong with you?” The man demanded with a slight rasp.

She didn’t bother answering as she braced herself with a stronger stance and committed his appearance to memory. Her gaze slid past his legs and over a strong, broad torso. His wide, square jaw suited his broad mouth and full lips, which sat in a harsh scowl. A bump hinting at a bad boy side marred his strong nose. Close-set, cobalt eyes glared up from his prone position. Light brown, wavy hair, still just a little too long, brushed his collar.

Crap. Chills of dread slithered along her spine. Those eyes—and the rest of his oddly intriguing face—had haunted her dreams for nearly a year.

His spicy scent reminded her of the cloves she sometimes cooked with and fully clothed he put half-naked romance cover models to shame. That hard body would be a masterpiece uncovered. Whoa! So not the time for fantasies.

“I realize we didn’t meet on good terms before, but I didn’t expect to be attacked,” he said as he pushed himself to his elbows.

Her pounding heart plummeted. She stumbled back, vividly recalling the other times she’d seen the man currently sprawled at her feet. In dreams, he’d sprawled naked on her bed. In person, he avoided her. Or he had at the courthouse when she’d attended the closing day of trial and tried to thank him for helping her, to thank him for ensuring her husband’s killer went to prison.

Her stomach dropped like a lead balloon. The broom slipped from her grip, landing on his chest and making him flinch. “Who’s dead?”

“Sorry?” Harte’s brows pleated as he flicked her makeshift weapon aside.

“Why are you here? Who have I lost now?” She released a shaky breath. The kids were at the water park with Grace. Safe. She couldn’t lose them.

“No one I’m aware of.” Detective Harte jumped to his feet in a lithe move.

“Then why are you here?” Relief wiggled her knees and threatened to take her to the ground beside him. She contracted her muscles refusing to be weak. She would control herself this time.

“We need to talk.” His hard, unreadable eyes regarded her as he pointed behind him. “What the hell was that?”

Startled, either by his move or the shivers his voice sent down her spine, she raised her gaze. He towered over her by at least six inches. Lean and ropey, he was harnessed power.

She bit her bottom lip to suppress a nervous giggle. How crazy was it to find his irritation sexy? Or to have her mind jump to the sexy image of him in a prone position naked in her bed? “My son Jared’s latest attempt at a pet. Is my family safe?”

“They keep dying.” His presence scared her, but she remembered tenderness. The way he’d held her. And he’d gotten right to the point of delivering the bad news. He was alert and edgy, but not as foreboding as last time. He wouldn’t be talking about fish if something had happened to her family. She sagged against the wall as her mind settled.

“What are you doing here, Detective Harte?” As soon as the words left her mouth, his slightly cynical smirk slid away to a flat, blank look. Her throat tightened, her stomach jittered, her heart hammered.

“I need to ask you some questions, Mrs. Sullivan.”

“About…?” Something that’s going to screw up my life again.

Posted by Amy Blackwelder at 1:35 PM