Death by Default from Trish Reeb and Brian Webster 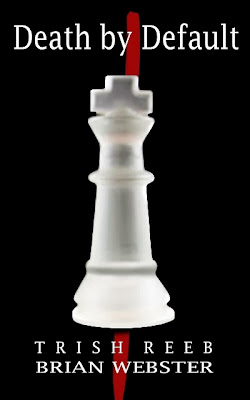 Why do I write? I can't help it. It's what I do. I love to see where the characters will take me. Not only do they have a say in what happens to them, but they can dictate at what point in the story it occurs. If they object, they dig in their heels until I finally get the message or yell "uncle."

When did I start writing? I wish I'd started in middle school, like my daughter. But I was more like middle-aged. I began my first novel, Dance of Deception, around 2000 and started Death by Default a couple years later. After a bazillion rewrites, I published them in 2012 and 2013 respectively. Also, this year on the fiftieth anniversary of my mother's death, I published her novel, No Place to Hide. As an author, I know how fulfilling it is to see one's book in print. It's like a newborn baby. She never got to hold it, but maybe on some level she experienced it vicariously through me.

Do I have a day job? No. I retired from Detroit Public Schools after thirty-one years. I taught special education then jumped to counselor, initially in elementary then high school. That's where I found my niche. Actually, the last eight years of my career, I worked at my alma mater. So, you could say I came full circle. Dance of Deception is set in that very school but under a fictitious name. For obvious reasons.

What genres do I write? Mystery is my passion. I currently have two projects on the table. The first is a young adult novel, Black Ice, on which I'll be collaborating with my writing partner and idea man, Brian Webster. He writes the screen plays, I write the books. Our first venture was Death by Default. Now that it's completed, he will take on the script. My second project is the sequel to Dance of Deception, an Alex T & Co. mystery, which will most likely lead into a series. Recently, I wrote a piece for an anthology called The Extraordinary Woman Next Door, to be released in December. I also have written a children's book. But who knows what else I may try in the near future. . .?

My favorite movie? I love musicals, with Westside Story at the top of the list. Not only did I see it on the big screen when it first came out, it still can make me cry.

Death by Default: Detective Conner Smyth, a chess addict, has yet to win a game. When Blackguard6 challenges him online, he figures what the heck? But after chess pieces turn up on dead bodies, he realizes too late he's really screwed. Out of his league, Conner searches for a master chess player. In a race against time and out of options, he settles for a ten year champ. In a tit for tat negotiation with the boy's mother, he gets his chess guru in exchange for coaching the kid in hockey. After Conner's wife left him, he has no interest in other women . . . until he meets his new tutor's mom. Which of course, invites disaster.

Posted by Amy Blackwelder at 6:49 AM