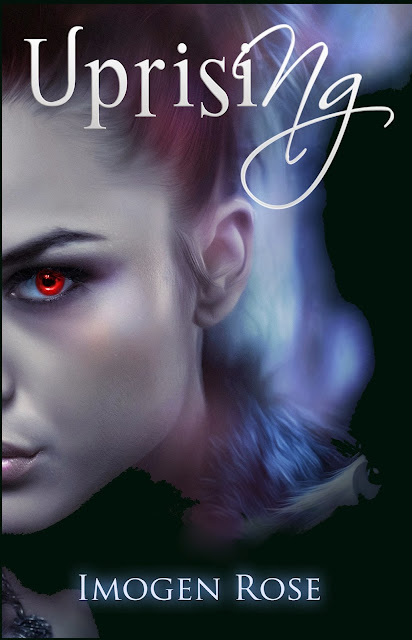 I have been a fan for Imogen Rose since her first book PORTAL and have reviewed for her and followed her amazing career. I'm proud to present an excerpt from her latest achievement.

Watch out NOV 20th for the Interview with Imogen Rose!

He felt as dead as she looked. With each blow to her lifeless body, he felt his sanity ooze, drop after drop, into the pool of her blood. She was dead. Her only hope now was the guy who had stolen her from him.
The knock on the door filled Quinn with loathsome fury. Had he not already been in his demon form, he’d have transformed because the person on the other side of the door deserved what he had unwillingly subjected Cordelia to.
He flung the door open, growling at the winter faery who was keeping Cordelia’s heart beating. Jagger swept past Quinn to the corner of the room, kneeling down beside Cordelia’s torn-up body. His pale winter hue darkened. He shot to his feet, bringing up his leg and slammed his foot into Quinn’s stomach.
Quinn fell back in surprise, his demon exterior not so much as reddening as a result, but he felt on the verge of losing it and tearing Jagger’s head right off of his fey neck. But he checked himself. If Jagger’s heart stopped, so would Cordelia’s, and Quinn couldn’t allow that to happen.
“What the fuck, Quinn? What did you do to her?” Jagger’s voice was barely audible; his mood had turned from anger to desperation as he looked at the body on the floor again.
Quinn transformed back into his human form, revealing a mess of injuries and broken bones. “I had no choice. It was this or death.”
“Or death? She is dead, you moron!”
“No, she isn’t. Her heart is still beating.”
“Only because I’m beating it for her,” Jagger muttered.
“Only because I’m letting you beat it for her,” Quinn said quietly.
“She needs a healer.”
“Wander her back to the Academy. But hurry. Potomal’s team is on their way and will be here soon to collect her.”
“Potomal?”
“A Wanderer working with Katerina.” Quinn winced at the stabs of pain his human body was unable to dampen.
“What about you? What happened?”
“Cordelia didn’t go down without a fight, but never mind that. I’ll heal. I need you to beat me to within an inch of my life. Here, use this.” He handed Jagger a tire iron.
“Much as I would love to beat the hell out of you, why? If you’re afraid of what they’ll do to you when they find out you let Cordelia escape, why not just come back to the Academy?”
“No time. Plus, the best way for me to protect Cordelia is from the inside. Hurry.”
Jagger glanced down at Cordelia and then raised the iron bar.

Posted by Amy Blackwelder at 8:42 AM